I also did a tour through the “Heart of Darkness,” here it is.

Here is my tour through Europe and the Congo in Joseph Conrad’s Heart of Darkness:

Here is WW1 Modernism
my modernism project. It is a podcast on T.S Elliot’s, “A love song about Alfred J Prufrock”.

Here is a link to my map on The Other Boat. Enjoy!

Here’s a quick 2-minute history on the Partition of India give it a listen.

Of all the poems that Alfred Lord Tennyson wrote, one poem that struck me particularly was The Lady of Shalott. After reading this poem, I definitely knew that it was something that I wanted to go back on and analyze closer, see if I could pull out any new or more complex themes that I had overlooked from my first reading of the poem. One thing that I thought of was the word and concept of submission. How, in Alfred Lord Tennyson’s poem, did he evoke submission? I am one of many who was very puzzled by the last part of this poem, in regards to what it is that Lancelot had to say about the dead body of The Lady of Shalott. In this post, I strive to make the claim that Alfred Lord Tennyson’s poem The Lady of Shalott is a poem that promotes women to be submissive.

It is important to give historical context to the time period in which Tennyson was writing in. Tennyson’s works were within the Victorian Age, which was a time of economic growth due to the industrial revolution, but literature was also very much defined by the “Victorian temper” of moral responsibility. It is also intriguing to note that The Lady of Shalott is a revisit to the Renaissance period, with its themes of knights, towers, and magic. This revisiting to the Renaissance period in the midst of the Victorian period is intriguing because I believe that both periods deal a whole lot with submissions in their literature due to the theme of chivalry in the Renaissance and then the “Victorian Temper” in the Victorian period.

In the eventful conclusion of Tennyson’s poem he writes the final stanza of “Who is this? and what is here?/ and in the lighted palace near/ Died the sound of royal cheer;/ And they crossed themselves for fear,/ All the knights at Camelot:/ But Lancelot mused a little space; He said, “she has a lovely face; God in his mercy lend her grace, The Lady of Shalott.” (Tennyson 1166). I think that the initial questioning of all the people who discover the dead body of the Lady of Shalott was very intentional by Tennyson because society will refuse to take ownership of any death or tragedy that occurred due to the values they it holds. Many women had died due to working in the mills and it was very common for the foremen of the mills to decline responsibility. Now Lancelot’s first and last interaction with the Lady of Shalott is very intriguing. Lancelot is the only one who approaches the dead body, which is ironic because if you follow my logic of taking ownership, Lancelot does exactly that by being the one to walk up to the body and that is ironic because it WAS Lancelot’s fault that the Lady of Shalott died because it was him that “she left the web, she left the loom,/ she made paces through the room,/”. 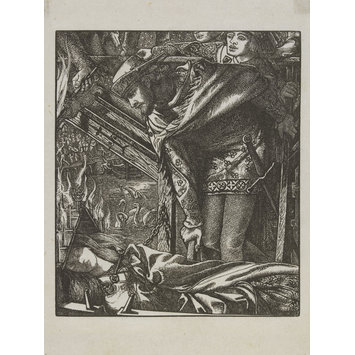 This is an engraving illustrated by Dante Gabriel of the final stanza in the poem The Lady of Shalott.

Here is the link to my pitch for my new app: Victorian Leap. In this app the goal is to recognize texts and be able to pick who the author is, the date it was written, and the name of the piece. At the same time there is a fun aspect to it where you will be able to use a launch pad (if you’re familiar with the video game Madden- the launch pad resembles this) and aim while at the same time avoiding jumping snakes in the rivers and under the logs.