This app is an entertainment app for young adults from high school until post-university graduation age. It will help them further understand the importance of William Wordsworth and his poem “I wandered lonely as a cloud” as well as the tenets of Romantic literature in British literature as they learn about it in class and beyond. Ideally, this app will include more poems, but for now, it will include one
It will take them through Wordsworth’s poetry stanza by stanza, with prizes, informational boosters, and decision making tactics.

Things that set this app apart from others:

-Boosters of connections to Romantic literature and their tenets
-Choices for the user to make in order to further their involvement with the app
-Different settings, taking the user out of the initial location of the app
-Coins after the user does a productive and correct usage of the literature and digital organization of the application, which can then be used later to further their excelling in the application’s episodes
-Customizable character

Boosters: At each positive choice and decision, the screen of the application will congratulate the user of showing one of the tenets prevalent in Wordsworth’s poem with a flyby of the words that are being shown, such as “+ Lyric Poetry,” “+ Romantic Sublime,” and “+ Egotistical Sublime”
The choices within the app will be shown as prompts that are also quotes from the poem to hint to the user what his or her character should do to get to the next clue.
“I wandered lonely as a cloud / That floats on high o’er vales and hills” prompts the user to jump on a cloud passing by that will take him or her to a valley of daffodils. Different settings will be shown in flashback settings in which to show how much these daffodils affect Wordsworth. In the third stanza, the narration will prompt the user to simulate a flashback discussion, therefore adding to the legitimacy of your character. At each booster, the user also gets an additional few coins, which can then be added to their wallet to buy outfits or another ticket to play another game faster than the system will allow us to. Lastly, the character will be customizable and ready to be named. 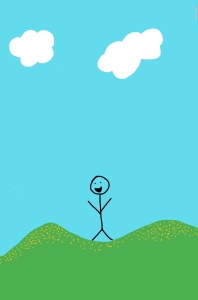 Clearly, this is not the best artistic rendition of an app, but ideally, the user would see the daffodils in the fields and would have to go through a series of steps in order to get to the next section; shown by the quotations used that then create the poem “I wandered lonely as a cloud”

First, the user has to jump on a cloud which will then float over to the valleys and hills full of daffodils, but first the user must swim through the lake to get to the daffodils, at which point, the user will get a booster of “Lyric Poetry” in align with the first stanza. The next section that the user has to do will be to follow the Milky Way, in which case they will be taken to the daffodils. The daffodils will light up, and the user must tap them so the character then counts the daffodils, like Wordsworth. As the user taps them, the daffodils will “toss their heads in sprightly dance” (Wordsworth). Then the user must press a button to dance with the flowers, and find themselves gazing at the daffodils at the end of their dance. This simulates a flashback to when wealth was dissatisfactory, and they were surrounded by materials, but the whole world was grey to them. Their character speaks Wordsworth’s words, and they get a booster of “Romantic Sublime.” Lastly, they see a screen that says “Time Passes,” and their character is found on the couch after a long day. His inner eye (third eye, on his forehead) begins to glow, prompting the user to tap it, at which point a heart shows up on the side of the screen, prompting the user to continue tapping the inner eye until the heart fills up. Once the heart fills, he’s taken back to the daffodil field and the user gets a boost of “Egotistical Sublime,” and the game has ended. Once the game ends, the user is taken to the home screen of more digital renditions of poems from the romantic period, in order to further understand all the tenets of it.

App used to make the photo of what the app looks like: Draw.ing Pad
Project Gutenberg, translator. “Songs of Innocence, and Songs of Experience by William Blake.” Gutenberg, http://www.gutenberg.org/files/1934/1934-h/1934-h.htm. Accessed 2 Apr. 2018.