Satire, the perfect way to expose a problem without being too direct yet too concealed that the point is simply lost. We’ve viewed several elements of satire through the Restoration Period thus far, each serving the purpose to expose a sociologic problem occurring at the time. But if these problems were so extreme why not just form an angry letter explicitly addressing the problems directly? There are many answers to my rhetorical question but the biggest being: where’s the fun in that and addressing the problem through creativity has proven to be a much better solution. Your audience is appalled by the ridiculousness of the writer yet the meaning of that behavior becomes apparent. I will be addressing two texts specifically throughout this blog, each with a significant meaning behind them for the overall populous to address, and they arguably could even apply today.

I mean satire isn’t really that great, there’s nothing wrong with creating a list of demands for the government or whomever to follow. We all know that people respond to vicious complaints of what to change in the world, even if they are subjective. Satire doesn’t even work, that’s proven by the text that just happen to be lying randomly in front of me that dates back from 1729 by Mr. Jonathan Swift. This piece is probably still very popular today because of its beautiful sentence structure.

The element of satire still very much exists today and for people who are aware of this brilliant device the meaning behind it becomes very apparent.  A very famous example comes to us from Monty Python and the Holy Grail, more specifically their satirical method of exposing the unethical and absurd method for witch hunting. This isn’t the only satirical piece that remains in today’s pop culture. Shows like South Park, The Office, Parks and Recreation and plays such as the Book of Mormon, just to name a few, thrive on satire. But does satire really work? The evidence for the sudden correction of the problems addressed isn’t documented in a back room in a library somewhere. However, undoubtedly, the pieces that utilize satire perfectly do shed light on problems which, if said piece gains enough popularity, will get the ball rolling in making the world a better place.

“A Modest Proposal” by Jonathan Swift is anything but modest. If the definition of “modest” involves eating children, wearing a newborn as a stylish hat, and raising children for the soul purpose of making a profit is considered “modest”, then yes, this is a indeed a modest proposal. In Swift’s thirteenth paragraph he writes “Infant’s flesh will be in season throughout the year, but more plentiful in March, and a little before and after…” (142) If the audience didn’t understand satire then this might come as a shock to the reader, and it will still come as a shock if they do. But of course Swift isn’t seriously addressing wearing your lovely new baby as a hat, he’s addressing the corruptness of the time period and the overwhelming poverty that roams the streets. Mothers need to eat, why not use their natural ability of childbirth to turn a profit? The highlight of the piece is on page 144, in our text, and is a list of proposals that Swift has in order to kill the problems facing Ireland. Among these proposals are brilliant ideas that eliminate mothers giving birth without being married, overpopulations, and raising children with love, homelessness, and overall poverty. If this is read by the right audience, an audience that doesn’t take everything literal and makes use of the absurdness, then maybe these problems got addressed to an extent. However these problems are always happening and most likely will never be solved completely. It’s interesting who will be the next Jonathan Swift and address the problems facing the world today. 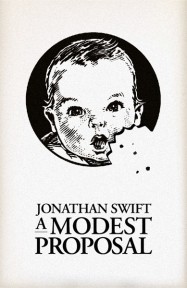 Shifting to another piece of satire addressed earlier on in this course is the play written by William Wycherly, The Country Wife. Satire doesn’t always have to have a comedic element throughout the piece, this play mixes wacky comedy with finger pointing towards the audience responsible in a very serious manner. This piece exposes the inhumane behavior amongst humans, more specifically, the interactions between the opposite sex. The play has themes of adultery, possessiveness , and violence towards men and women. A beloved character in this play is Pinchwife, a kind hearted young man that wishes the best for his wife and trusts her completely. I wish I could write this description in good faith but this character is the exact opposite. But she isn’t completely pure either so he has a right to be upset, maybe not enough to carve the word “bitch” in her face but still he has a fair argument. This character embodies the possessiveness that can occur in a relationship, or a marriage. His solution is to lock her in a room and treat her like property, granted the scenes containing Mr. and Mrs. Pinchwife is hard to swallow but it is Wycherly’s proposal to the problem. A great element in this piece is the mixture of poetry and prose. The play begins and ends with poetry, serious poetry setting the stage and laying blame to those responsible of these acts at the end. Maybe these poetic words don’t impact a direct meaning but they do however leave the audience thinking of the corruptness of society, “Whose purses for your manhood make excuse, and keep your Flanders mares for show, not use.”(Wycherly 68)

In conclusion, satire isn’t simply a serious of ridiculous proposals in order to solve the words problems, it’s a creative and witty method for a writer to address their audience in a manner that shocks them to the point where a change is very much needed.